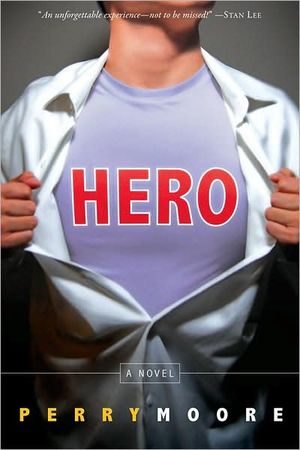 Thom Creed tries not to disappoint his dad, a disgraced caped crusader who now toils as a factory drudge, so he keeps his gay identity and his developing superpowers under wraps. Then he secretly tries out for the prestigious League, joining aspiring heroes in villain-busting adventures that escalate alongside more private discoveries. Written in a wry, first-person voice realistically peppered with occasional slang and slurs, this ambitious first novel from a Hollywood producer doesn’t entirely cohere. The alternate-reality framework is too cursory, and the more realistic strands feel overstuffed with problems, even as they incorporate many well-chosen scenes (including Thom’s awkward, anonymous first pickup, which goes only as far as a kiss). Still, Moore’s casting of a gay teen hero in a high-concept fantasy marks an significant expansion of GLBTQ literature into genres that reflect teens’ diverse reading interests; given the mainstream popularity of comics-inspired tales, the average, ordinary, gay teen superhero who comes out and saves the world will raise cheers from within the GLBTQ community and beyond. –Mattson, Jennifer, Booklist

Posted by Unknown at 1:01 PM No comments: